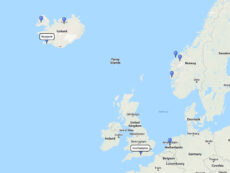 Discover the best of Iceland, Norway, Netherlands, Belgium and UK with Norwegian Prima

Reykjavik  tourist attractions. Reykjavik, on the coast of Iceland, is the country’s capital and largest city. It is the centre of culture and life of the Icelandic people as well as being one of the focal points of tourism in[…]

Isafjordur tourist attractions. With a population of around 2.600 people, the port of Isafjordur is the largest of all the harbours in Iceland’s Westfjords region, and the headquarters of the Isafjardarbaer municipality, which includes the surrounding Hnifsdalur, Flateyri, Sudureyri, and[…]

Akureyri tourist attractions. Akureyri is a lively and energetic town and important port and fishing centre is nicknamed the Capital of North Iceland. The area where Akureyri is located was settled in the 9th century but did not receive a[…]

There are plenty of daily activities on board Norwegian Prima to keep you busy. Norwegian Prima has everything a discerning cruiser could want, bars, sports venues and shops.

Sail away from Reykjavik and prepare to be dazzled by the riches of nature and culture as you travel through Iceland, Norway and Northern Europe on this wonderful voyage aboard Norwegian Prima. Visit Isafjordur, Akureyri, Alesund, Geiranger, Bergen, Amsterdam, Zeebrugge and Southampton. Norwegian Prima leaving Reykjavik, Iceland for 10 nights from September 7, 2023.