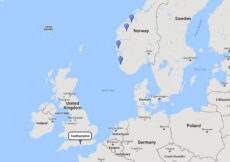 There are four cruise ship terminals in Southampton, all of which are made for cruise ships. Visitors are able to stay in the city before or after embarking on their cruise by taking advantage of the cruise packages provided by[…]

When visiting the Norwegian fjords, be sure to stop in Stavanger. Stavanger’s city center is small and walkable, featuring historic dockside warehouses and picturesque 18th-century streets that rise from a lively harbor. With more than 170 white wooden homes, Old[…]

In the municipality of Stryn in the county of Sogn og Fjordane, Norway, you’ll find the little village of Olden. Olden is situated on the southern bank of the Nordfjorden, at the mouth of the Oldeelva River, near the northern[…]

One of the most popular ways to see Norway is from the water, and the Geirangerfjord is a popular destination for cruise ships. Cruising the area known as the “jewel of the Norwegian fjords” will not leave you bored. Geirangerfjord[…]

Geiranger, which is located in the Geirangerfjorden and is the third largest cruise ship port in the country. Geiranger has one of the most beautiful settings in all of western Norway. It is home to some of the most breathtaking[…]

The historic Viking village of Hellesylt is located at the head of the Sunnylvsfjorden, a branch of the Storfjorden, from which the more famous Geirangerfjord branches nearby. Hellesylt is a little community of just over 500 people known for its[…]

The Norwegian city of Haugesund is snugly between the bigger metropolitan areas of Stavanger and Bergen, in the southwest of the country’s magnificent fjord coastline. Haugesund is the ideal short-stay destination due to its café culture, museums, galleries, and picturesque[…]

There are four cruise ship terminals in Southampton, all of which are made for cruise ships. Visitors are able to stay in the city before or after embarking on their cruise by taking advantage of the cruise packages provided by[…]

Join P&O Cruises on this roundtrip Norwegian Fjords cruise from Southampton to Stavanger, Olden, Alesund and Haugesund on board P&O’s Iona. Iona leaving Southampton, UK for 7 nights from August 19, 2023.