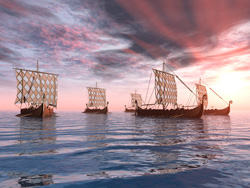 The Viking Longships In medieval Norway the basis for agriculture was poor.  Vikings were experts in water transportation as their native fjords stretched for great distances into Norway’s heartland. The Vikings built fast ships for raiding and war. These ships[…]

END_OF_DOCUMENT_TOKEN_TO_BE_REPLACED

The Viking Age in Western Norway Vikings, Norwegian and Danish, from Old Norse víkingr, were Germanic Norse seafarers, speaking the Old Norse language, who raided and traded from their Scandinavian homelands across wide areas of northern and central Europe, as[…]